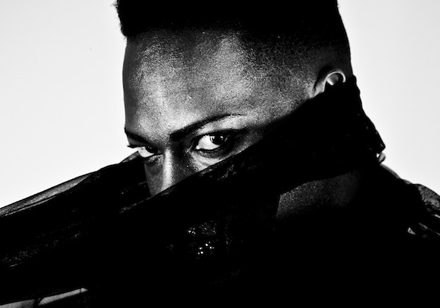 We’re not going to lie – we’re a little late on getting to know Eugene Lang College alumnus Ojay Morgan, who makes incredible dance/rap/electro music under the name Zebra Katz. Back in March, when Zebra was part of a Pitchfork.com feature on New York’s queer hip hop scene, he’d already had his song “Ima Read” released by Diplo (MIA’s longtime collaborator), played on a loop during a Rick Owens fashion show in Paris, and his famous fans include Azealia Banks, the Roots’ ?uestlove, and Saul Williams. Before that, he had a profile in The New York Times.

“Zebra Katz” began his life as part of Morgan’s senior performance art thesis at Lang in 2007. Morgan told Pitchfork about Zatz’s backstory: he “was a Chippendale dancer who quit working at Chippendale’s and moved to New York and then started working in sanitation. It just came to me one day. I really liked the play on the Jewish last name.”

Katz is, in a larger sense, an homage to the ballroom and ‘voguing’ scenes that were an epicenter of black and Latino queer culture in New York in the 1980s and ‘90s. Captured in the film Paris Is Burning and the Madonna song “Vogue,” voguing is described by Pitchfork as “a form of angular, improvisational and competitive dancing that can be compared to breaking,” and was a central part of the extravagant ballroom scene.

Morgan was working as a caterer when fashion designer Rick Owens chose to set his entire Paris Fall Fashion Week show to “Ima Read” on an 11-minute loop. Then came the press, hundreds of thousands of views for the gray, slightly demented video for “Ima Read,” and even an opening slot on indie phenom Lana Del Rey’s North American tour. Morgan doesn’t have to work as a caterer anymore.