This Friday, Parsons Paris student Molly Apple is launching the first issue of her magazine called MERDE. Molly is a second year graduate student enrolled in the Fashion Studies program. We decided to interview Molly to know more about MERDE and the entire process behind the creation of her work…

Want your copy of MERDE Magazine? PRE ORDER IT HERE 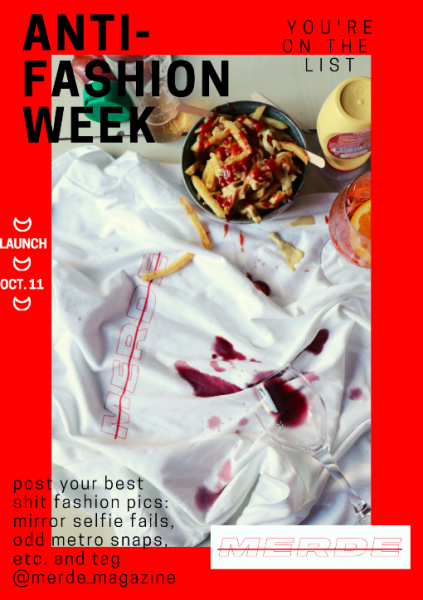 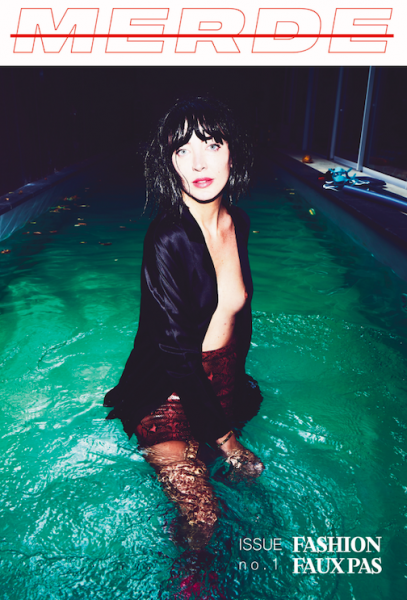 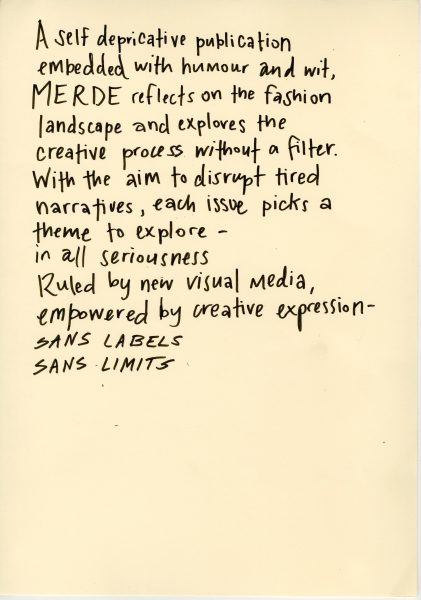 Tell us more about MERDE magazine…

The title “MERDE” is a self-deprecating joke at my attempt to learn the French language, but it represents a general mood that encapsulates this generation. We have short attention spans, small budgets, and the all encompassing feeling that the world is going to shit. The aim of MERDE is to disrupt the rules of typical fashion imagery, replacing it with raw and satirical photos and illustrations alongside witty written content that reflects a generation stuck between Millennial and Gen Z, seeking to define its own terms.

Is MERDE printed or on digital?

MERDE is print only (with the support of an Instagram page). I am drawn to print magazines because of their tactile quality which pulls me away from the endless scroll of online fashion images.

How was the process of creating the magazine? Tell us everything!

MERDE Magazine stemmed from my desperate need for a creative outlet to express the feelings of angst and irony I possess towards the fashion industry. I had the feeling that many of my like-minded peers would agree with my sentiment. The process of the magazine started last April after working on a class publication for my Master’s course – then when I began researching magazines for thesis, mostly anti-capitalist/commercial zines, it led me to the stories of their creators who tapped into the cultural and political currency of their own youth culture and turned their crazy creative ideas into visually stimulating magazines. I wish to do the same within our over-saturated digital arena, where there is an overload of constant content. MERDE will only publish twice a year.

When is the launch?

What are you most proud of?

I am most proud of the collaborations, especially working with the amazing photographer Flavien Prioreau, as well as having the ability to display my friend’s work and giving them a creative outlet.

What were your biggest challenges?

I hate to say my biggest challenge was money… I don’t want to “sell out” and I really want to stick to my anti-establishment ethos without advertisements. Therefore I funded this magazine with my own savings – but I know I’ll have to look for like-minded investors in the future who support my sentiment – which is ironic in itself because fashion is innately to sell, and I need to sell magazines but I hope my message comes across by being transparent and laughing at this notion.

Has Parsons Paris helped expand your creativity while working on this project?

Not only have my peers at Parsons Paris been extremely supportive of MERDE, but I gained a lot of advice and knowledge of the industry from my professor Justin Morin, who is the editor-in-chief of Revue Magazine based here in Paris.

Are there any products to come alongside the magazine itself?

I am selling MERDE products not only to support the marketing of the magazine but to fund the next issue! There will be stickers, T-shirts and tote bags.

Will there a second issue?

The second issue will be bigger and better!

You can find out more on MERDE Magazine on Instagram.